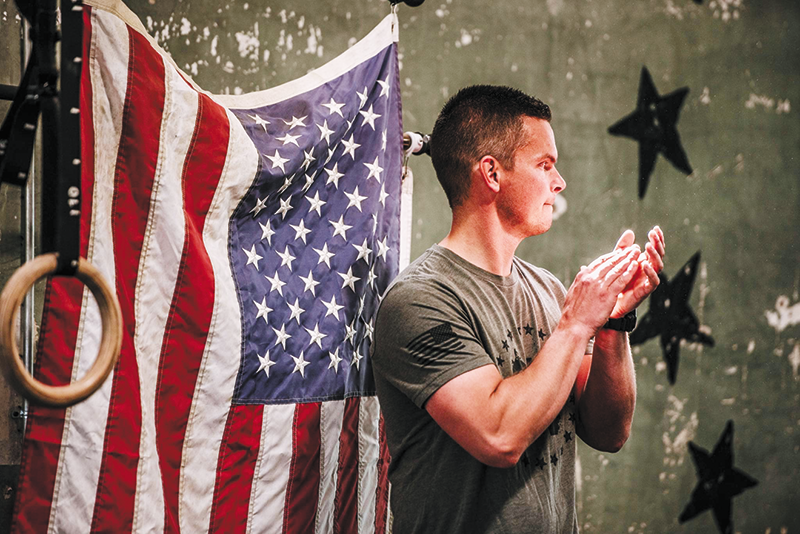 Clinch River CrossFit, a downtown Clinton workout gym, will help put on a special 9/11 remembrance event on Saturday, Sept. 11, on the 20th anniversary of the terrorist at- tacks. David Smith, the gym’s owner, is shown here at the facility. Hosting the event is the Historic Downtown Clinton organization.
The Historic Downtown Clinton group has partnered with Clinch River CrossFit to sponsor a series of events on Saturday, Sept. 11, to commemorate the 20th anniversary of the 9/11 terrorist attacks, and to honor our area’s own first-responders.

CrossFit, a workout gym on Market Street, will begin the day’s events with some workout competitions that will include such prominent local people as Dr. Tim Parrott, director of Anderson County Schools, and lawyer Dale Cantrell.

The ceremony begins at 10:35 a.m. to honor local first-responders.

Organizer Katherine Birkbeck, program director for the Main Street/Historic Downtown Clinton organization at the Anderson County Chamber of Commerce, said Market Street will be closed to traffic from about 7 a.m. until noon for the special events.

The Clinton Fire Department will bring two fire trucks to block the street, and the American flag will be raised on the ladder of one of the trucks.

For the recognition of first-responders, the ROTC group will hold a sword-crossing event and recognize the local fire, police and EMS first-responders by name and years of service, with special awards to those who have served the longest.

To honor those who died in the Sept. 11, 2001, Islamic-terrorist attacks, bagpipes will play at each moment that a plane crashed or a building collapsed on 9/11, Birkbeck said.

There will be three food trucks set up on Cullom Street near CrossFit, Birkbeck said. They will operate from 10 a.m. to 4 p.m., along with several vendors, who will set up nearby.

The food trucks will feature “healthful” items, she said, and will include Drink Smooth, Stick in a Box, and Three Chefs.

Jimmy Taylor, owner of the Apple Blossom Café, will be providing fresh fruit and vegetables to all the athletes who are competing that day, Birkbeck said. The CrossFit competitions will conclude with an awards ceremony at 4 p.m.

There will be activities for families during the event, including “some basketball, face-painting, and other kid-friendly” things, she said. “The Army will bring in an inflatable football game, as well.”

Beginning at noon, a TV playing in the Maude Brown Park gazebo will feature the University of Tennessee football game, Birkbeck said. The Clinton High School football team also will be there.

Most of the downtown merchants are planning to be open all day, until 5 p.m., and many will feature some specials for shoppers, Birkbeck said.

At noon, the street will be opened back up to traffic.

“I think it’s going to be a really special day,” Birkbeck said.