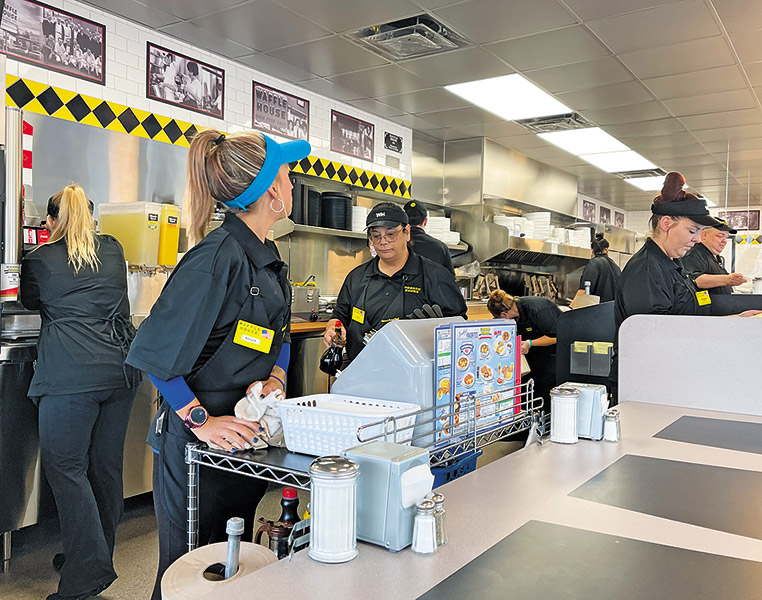 Doors opened just before 9 a.m., and there was brisk business most of the day at the new structure, which sits on the same spot as the previous one at 2255 N. Charles G. Seivers Blvd., just off Interstate 75, Exit 122.

There appeared to be plenty of staff on hand for opening day, and despite earlier indications by management that hours initially might be limited, the restaurant is operating on its normal 24-hour schedule.

Curtis Mount, senior vice president of Rocky Top Waffles LLC., the franchisee of the Clinton store, said it takes about 30 people on staff to maintain a 24-hour schedule. He said late last week that the hours might be limited to just the day and early evening shifts, but a call to the restaurant late Monday found that the plans were to be open around the clock.

In the past week or so, the parking lot was repaved and marked, and trucks had been delivering food to the building.

Speculation had run rampant on local social media sites for the past several weeks – or even months – as to when the Waffle House would be back up and running. Lots of commenters had expressed disappointment that it seemed to take so long.

Workers took only a couple of days in early February to tear down the original building, which had been in that location about 30 years. Mount said at the time the rebuild could take “several months.”

The city of Clinton issued a building permit to the restaurant’s owners Dec. 8, showing a cost of $550,000 for the construction of a 2,132 square-foot “new commercial structure.” Contractor for the work was listed as Market Place Holdings.

The project has been nearly a year-and-a-half in the making, so far. Rocky Top Waffles originally obtained a demolition permit from the city for the old building in January 2020, intending to close and rebuild last year.

But the shutdown and demolition were delayed by the COVID-19 pandemic hit, and the project had been on hold for a year when the project began with the closing of the restaurant this January.

Mount said in January 2020 that the entire project could take four to eight months to complete, and that there would be no Waffle House in Clinton until the new facility was completed and opened.

“It will be a whole new building,” Mount said at the time, adding that it would be “just a little bit larger than the present building,” which has been open in that spot for more than 30 years, and will have “about eight more seats, if that.”

Some of the previous Clinton staff has returned to the new building, after taking temporary positions at nearby Waffle House locations during the reconstruction period. There are other locations in Caryville, Powell and Oak Ridge.

The Powell location is reported to be on the list for a rebuild next.

The first Waffle House was opened by Joe Rogers and Tom Forkner on Labor Day, 1955, in the Atlanta suburb of Avondale Estates. The parent company, headquartered in Norcross, Ga., has more than 1,500 Waffle House locations, both company-owned and franchises.

Rocky Top Waffles, LLC, has 32 Waffle House locations ranging from Bristol to Lenoir City in upper East Tennessee, according to its Facebook page.