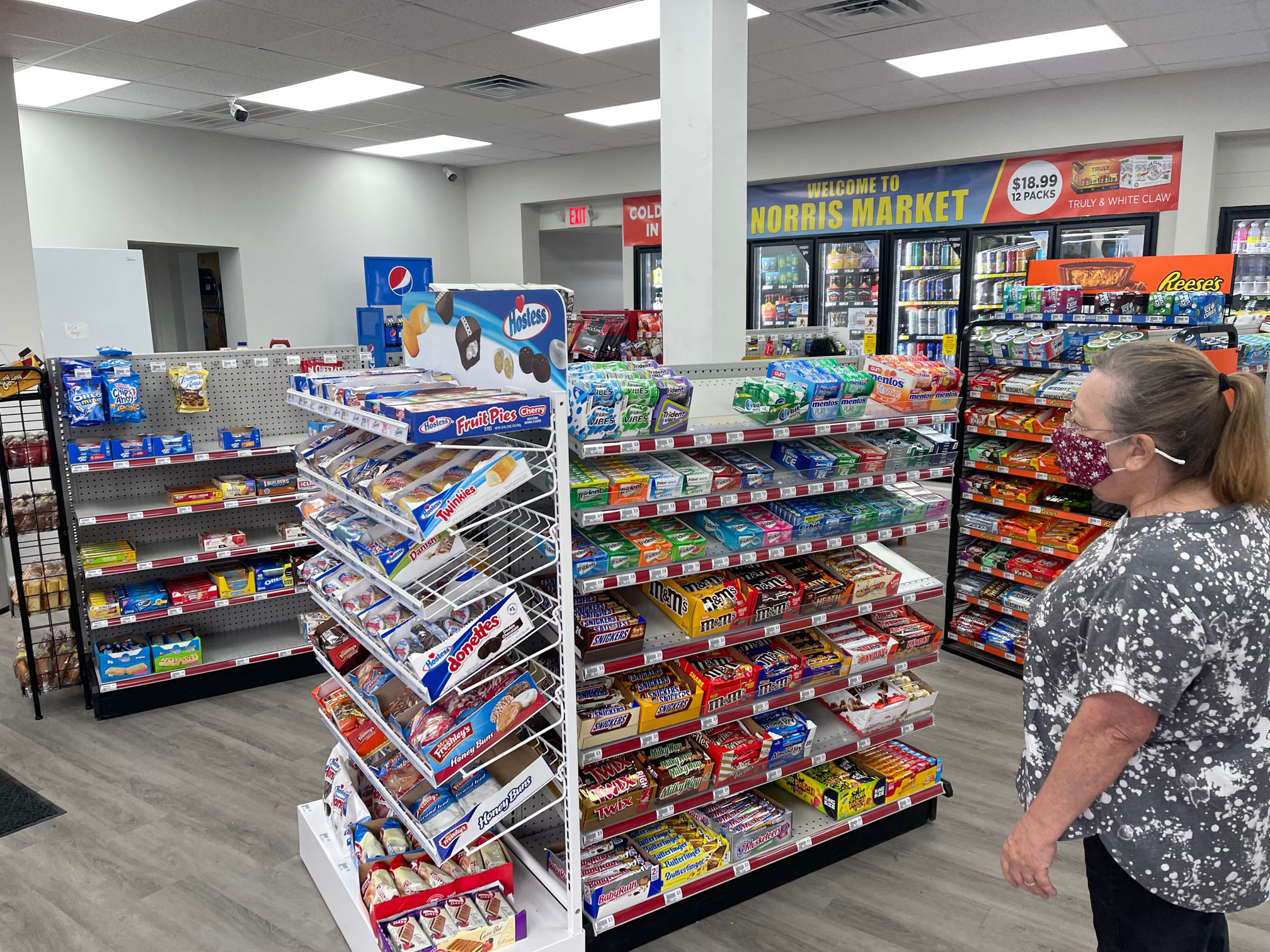 The new Norris Market convenience store has opened its doors and gas pumps in the city’s downtown area.

In the former Norris Service Station location across from the post office and Archer’s, the store offers gasoline and typical convenience-store merchandise, such as beer, soft drinks, some grocery items, and tobacco products.

Not open yet, though, is the deli portion of the store, which will be ready probably sometime next week, bringing freshly-made fried chicken, pizza and other items, said store manager Magic Salim.

The store’s owner, Alan Hermani, said last Thursday (Sept. 16), that he was waiting only for the gasoline pumps to be inspected by the state before opening. On Saturday, the store opened, and before long, customers were already using the self-service gasoline pumps out front.

Hermani, of Knoxville, bought the old service station property, next to the Vega Café & Smokehaus, in June 2019. He said in mid-2020 that he planned to remodel and reopen it as a convenience store with a deli, offering snack foods, dairy products, slushies and more.

The “more” includes the Krispy Krunchy brand of fried chicken, and the Hunt Brothers brand of fresh-baked pizza, he said. The store also will offer breakfast sandwiches and biscuits with gravy during the mornings.

Takeout foods will be available either inside the store or from the drive-through window that has been installed on the right side of the building, said Hermani, who owns several similar stores throughout the Knoxville area. The nearest one to Norris is the Haskell Market in Raccoon Valley, he said.

Up to 10 employees will be hired for the Norris business, Hermani said.

Since the Norris Service Station closed about four years ago, there has been no gasoline available anywhere in Norris. The nearest gas pumps – until now – have been either in Andersonville or near Interstate 75, Exit 122.

The Norris Market sells the Sunoco brand of gasoline, and there is one pump available that offers ethanol-free gas, Hermani said.

“We wanted to do something the community does not already have,” he said. “We’ve done a lot of research and come up with that as to what we should be doing in Norris. It will be me and my wife, Shireen.”

Krispy Krunchy Chicken was founded in Lafayette, Louisiana, in 1989, and has been recognized as one of the fastest-growing convenience store-based quick service restaurant concepts in the nation.

As for the new Norris Market, it “will have a small dining area with TVs and some toys and games for kids when they get off school,” Hermani said. “The kids can sit down and chill and get something to eat.”

“We will have the drive-through window for food, drinks and snacks,” he said. “People can drive through and go back to work or school.” Hermani said the store will be open seven days a week, from 6 a.m. to 9 or 10 p.m., “depending on how it goes.”