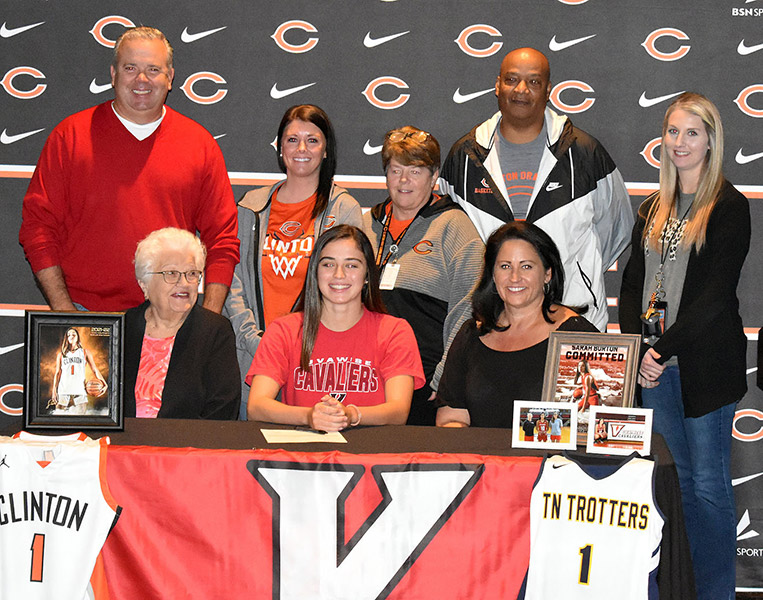 Clinton High School’s Sarah Burton signed to play with the University of Virgin- ia-Wise, last week. She is pictured with her family and coaches. (photo:Ken Leinart )
Now Sarah Burton can enjoy her senior year.

The Clinton High School basketball scoring machine signed a letter of intent with the University of Virginia-Wise, last Wednesday.

“I’m excited for her. She’s going to go in and make an impact from the get-go,” said Clinton High School Lady Dragon Head Coach Alicia Phillips.

“She’s going to a very competitive level, their conference is tough, but I think Sarah’s got the work ethic and she’s going to be great.”

“We’ll have her next year,” she said.

Burton was injured and missed half of her freshman year.

Then her sophomore year rolled along.

“Her sophomore season is where she broke out and she became an offensive threat for us and she progressed from there,” Phillips said.

As her game progress so did interest from colleges. Burton said colleges started having conversations with her during her sophomore campaign.

“I’ve talked to about 30 schools,” she said. “Ten have made offers. But I feel in love with UV-Wise. That’s where I feel mostly at home. I have a good relationship with the coaches, with the other girls, and I really like their facilities.

“There’s just a lot of positives.”

Burton said she’ll major in a business-related field, but hasn’t narrowed it down as of yet. She still has a few goals left for her high school career such as topping her coach’s school record for most points in a career, and scoring 2,000.

When Burton started opening eyes her sophomore season the question of how good can she get started popping up.

“I’m very proud of. Her. She’s work, put in the work to make it happen for her,” her mother, Tracy, said. “During her sophomore year people would come up to us after a game and say, ‘wow, we enjoyed watching her.’”

“It’s been a long time coming (the signing). I’m proud of her. She’s worked hard. There’s no off-season for Sarah,” he said.

“The recruiting process has been interesting, but now that it’s over I hope she can enjoy her senior year.”

Both parents say the drive to Wise, Va., won’t be a problem.

“It’s close enough that we can go see her, but far enough away that she can enjoy her freedom,” Tracy Burton said.

There’s still work to be done before heading to Virginia.

Phillips said she excited that Burton will break her school scoring record. “I’m excited to hand it over to her, as long she stays healthy she’ll get it,” she said.

But she also noted Burton will have to work for it. “This year is going to tough for Sarah in the half court because teams will double team her,” Phillip said. But she added, that may not be as easy to do as other teams may think. The Lady Dragons are going to be pretty darned good.

Once this season ends and Burton’s career at UV-Wise begins, how long before she sees herself playing a lot of minutes?

“I’m looking forward to playing, but nobody is guaranteed playing time,” she said. “If I work hard I think I can contribute.”