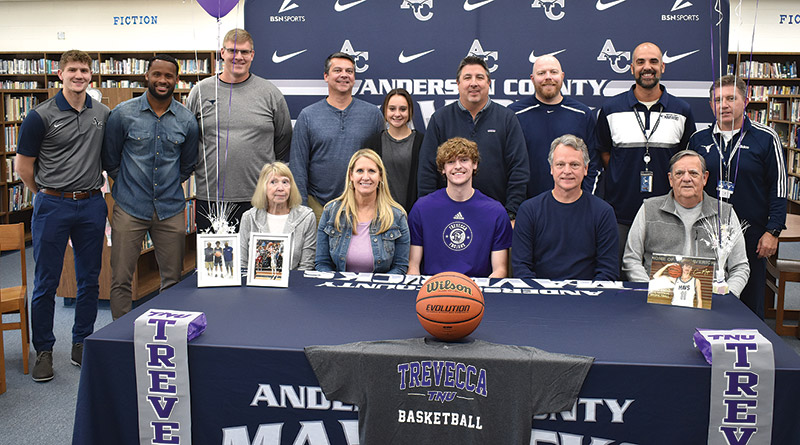 Anderson County’s Conner Martin signed his letter of intent to continue his basketball career at Trevecca Nazarene University in Nashville. He is pictured at his signing with his family and coaches.
Derek Wallace knew he had something special.

“That was my first introduction to Conner Martin,” Wallace said. “I knew right then he was going to be a special kid.”

Wallace said that as a freshman, Martin was just “a big kid.” He had good size but he needed to work.

And work Martin did.

“They’re getting a steal,” Wallace said.

The last 18 months have been a journey for Martin. He started working out with Dominic James, the standout player from Marquette University.

“I’ve watched this young man grow not just physically, but spiritually in the last year and a half. He has prepared himself to play basketball at the next level. I think he’ll do well.”

Martin reshaped his body. He toughened up.

But one thing didn’t change — his faith and his humility.

“First, I need to thank God for giving me the gifts I have,” he said before signing his letter. “Coach Wallace has been great to play for. Dominic has been a true inspiration to me.”

Martin said he hopes he’ll be able to contribute as a freshman for the Trojans. “I think I’ll see some playing time, but you never know.”

His high school coach said Martin should definitely be able to make an impact early.

“He’s reshaped his body and learned how to work hard,” Wallace said. “Dominic has been a big part of that. And he’s made himself into a good ball player. He has a wing span of about 6-11 and he can use it.”

There were “several” schools looking at Martin and making offers, but he said once he visited the school’s Nashville campus and met the people there, he was hooked.

And the school is close to home, something his mother, Kim, pointed out.

“I know he’s worked so hard for this, especially during the last year and a half.”

Martin said he plans on majoring in engineering. Or maybe in something in agribusiness. He’s not sure yet, he says, but it’ll come in time.

And when it does, Martin will work at it, and work hard.

“He prepared himself for the next level,” James said.