November 24, 2021 by Richard Evans Special to The Courier News 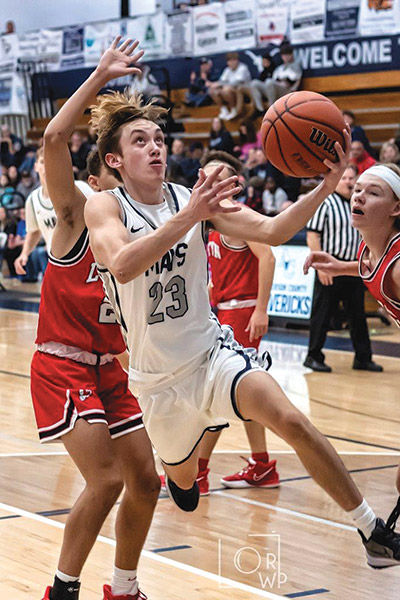 Brandon McGhee drives for two against Loudon. (photo:Ricky Williams )
The Anderson County Mavericks basketball team got its season started in a big way.

Last Thursday, the Mavs picked up a 76-35 win over visiting Loudon.

“That was our first action with the football kids; I thought we played really well,” said Derek Wallace, head coach of the Mavericks.

The Mavericks jumped out to a 26-8 lead in the first quarter on the scoring of Connor Martin, Bryson Vowell and Brandon McGhee.

They built a 45-15 halftime lead and never looked back.

The Mavericks’ defense was dominant in the contest as they forced 34 turnovers and had 24 steals.

Martin led all scorers with 19 points, while Vowell chipped in 15 and Brandon McGhee had12.

On Saturday, the Mavericks picked up three wins at home.

Anderson County picked up win No. 1 of the day 75-55 over the homeschool Knoxville Ambassadors.

“I got sick,” Wallace said. “I wasn’t feeling great and after the first game, I went home. I wasn’t even there for Greenback and Sunbright. Coach [Brian] Stewart and Coach [Mitch] Cupples handled coaching duties. The kids played well. We’re pressing this year and it’s hard to play three games, especially three in four-and-a-half hours. Our last two were back-to-back and it was a lot to ask. They did what they could.”

Connor Martin led all scorers with 19 points while Brandon McGhee added 12 points as did Carter Nelson.

Though it was a one-point game entering the second quarter, Anderson County pulled away to a 29-13 lead at the half. The Mavericks had 20 steals and forced 28 turnovers.

The Mavericks also picked up a 50-45 win over a scrappy Sunbright squad.

Anderson County took control in the first quarter and managed to hold the lead throughout the game despite a 21-point outburst from Sunbright in the fourth quarter.

The Mavericks return to action with a game at Maryville on Tuesday Nov. 30. They return home Friday, Dec. 3 to face district and crosstown rival Clinton. Tip-off for both games is 7:30 p.m.