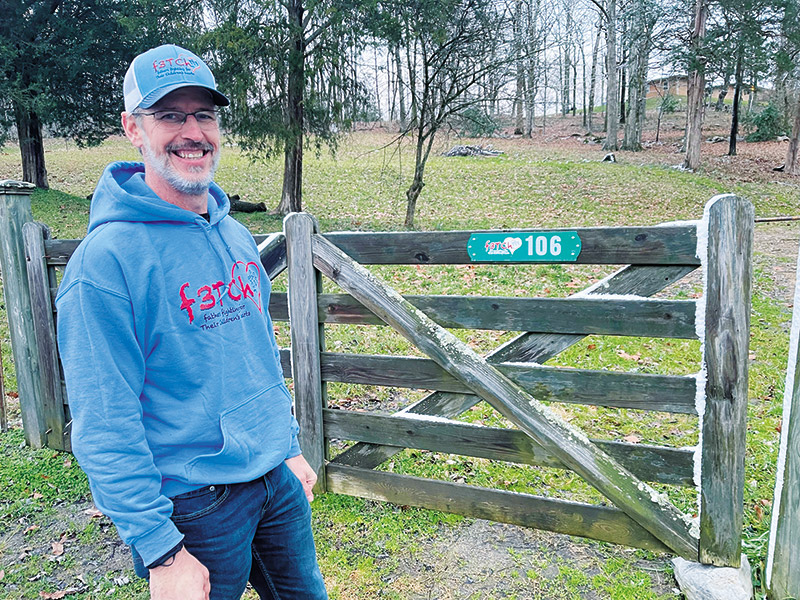 Dwight Stitt of Fathers Fighting for Their Children’s Hearts (f3TCh) stands at the entrance to the group’s camp property on Sinkings Springs Road near the TWRA boat launch, where pieces of the old Green Bridge will be erected as part of a pavilion. (photo:G. Chambers Williams III )
Although Clinton’s historic Green Bridge is soon to be gone, some parts will reappear on Tennessee Highway 61 near the city’s other Clinch River bridge, as a local nonprofit uses pieces of it to build a park pavilion.

Dwight Stitt, who created a nonprofit that runs a camp for dads and kids each year on Father’s Day weekend, said Monday that he has secured permission from the new Lewallen Bridge’s contractor to use some of the old bridge to create the pavilion.

“I’ve been working with Blalock Construction,” Stitt said. “They’re going to be salvaging four of the steel girders under the bridge, which we plan to use for the overhead frame of the pavilion.

“They will be sitting on top of concrete pillars we will be building,” he said. “On the ends – parallel to Highway 61 – we will use the entrance beams from the old bridge. Those pieces on the top section will be built into the roofline so you can see the entrance trusses on both sides.

“People will also see the steel girders that were underneath the bridge, and some of the actual green steel from the bridge.”

The nonprofit group is called Fathers Fighting for Their Children’s Hearts (f3TCh). It has been holding the annual weekend camps for kids 5 and up since 2014 on land adjoining the TWRA boat launch site at 106 Sinking Springs Road. It’s just off the southeast end of the bridge over the Clinch on North Charles G. Seivers Boulevard.

Until now, the summer camps have been held on the property of John Gamble, Stitt said. But the nonprofit – which was established in its current form in 2017 – has now bought two acres “adjoining that property, so we can start holding monthly events there,” he said.

The 30-by-60-foot pavilion will be the center of the camp, and will have picnic tables under it, Stitt said. “We will be using it for our events, and also will make it available for rent for other community events.”

There also will be a commemorative plaque put on the pavilion detailing some of the history of the Green Bridge, he said.

Stitt said that when he began thinking about how to construct a pavilion on the newly acquired property, he thought of the Green Bridge, which was a big part of his life growing up in Clinton. He is a 1992 graduate of Clinton High School.

“I approached Blalock Construction, and they agreed to donate some of the old bridge pieces for the pavilion, and also said they would deliver them to us at no charge,” Stitt said.

“This most likely will be the only use of any of the old bridge pieces that people will see, as the rest will go to salvage,” he said.

Stitt recently posted his plans for the pavilion on his Facebook page, where he described the work this way:

“We will build out and pour four solid concrete pillars (with detached slab) for the uprights and overlay them with stone. Spanning each 60 (foot) side will be two 30 (foot) steel girders, cut from below the bridge, and they will be welded/plated together in the center to span the 60 (feet) to make a cantilever-style frame.

“We will then stick-build the roof atop the frame, but on the far end caps of the 30 (foot) sides, we will have a steel fabricator cut both the entrance sections salvaged from the overhead truss work to conform to the same pitch as the roof and weld them in place.

“This will be done in such a way to preserve as much of the original look and color of the bridge. It will be built parallel to its sister bridge crossing the Clinch, so the 30 (foot) ends are very visible to traffic on (Highway) 61. This way, regardless of the direction of travel on 61, everyone will be able to look over and see the old entrance beams of the Green Bridge.”

There is one catch: Stitt still needs to raise the money to build the pavilion, but hopes to have his plans approved by the Clinton Planning Commission “no later than February,” and have construction begin in March or April.

“The goal would be to have it up for this year’s camp, Father’s Day weekend in June,” Stitt said.

Until now, the group has held only the single event on the property every year, but now that it has bought the property, it plans to have monthly events through October, beginning with a fund-raiser in May, he said. The group f3TCh is a 501(c)3 nonprofit.

Stitt, who now lives in Strawberry Plains, said he grew up “fishing on the Clinch River.”

“I’m tying this into my childhood memories,” he said.

He grew up on Medaris Street, and has fond memories of fishing the river with his dad, Douglass Stitt, who died in 1998, he said. His mother is Catherine Stitt.