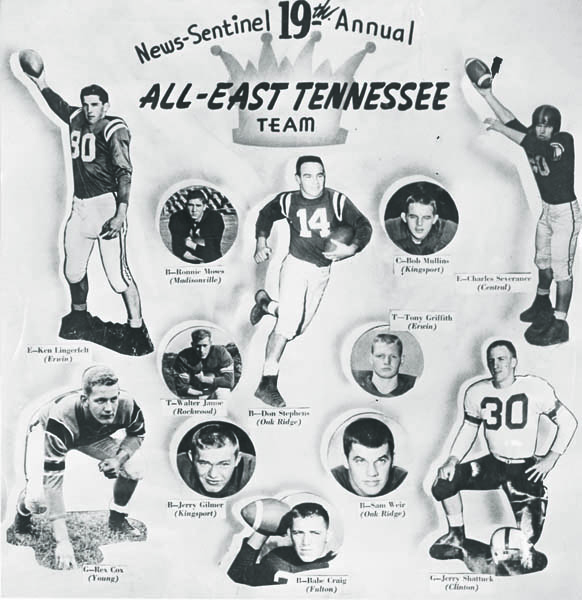 Jerry Shattuck, bottom right wearing number 30, was selected to the All East Tennessee team in 1956. Selected by the Knoxville News-Sentinel, players on that team came from upper East Tennessee and down to Madisonville in Monroe County.
If you think of Clinton High School in the 1950s, you don’t think about football.

After a very successfull 1948 season, Dragons closed out that decade with a good 5-3-1 effort.

Pelham Andrews, Jerry Daniels and Virgil Rains were stars for the Dragons in the late 1940s.

Daniels signed with the Tennessee Tech and was drafted by the San Francisco 49ers.

The National Football League in the late 1940s-early ’50s was not highly regarded. The NFL of the first half of the century is not the NFL of today.

Legend has it that when Daniels was drafted, his wife called him and said something to the effect that he’d better forget about the 49ers and get his behind home or there wouldn’t be a wife to come home to.

Daniels’ pro football career never got off the ground.

The 1950s did not start well for the Dragons, who opened the season with an 0-9 campaign. But the tide turned with what would be the senior class of 1956.

The Dragons played in the Bob Neyland Conference and may have been the smallest school in play.

Lake City, Oliver Springs, LaFollette and Jacksboro were also in that conference. Lake City and Oliver Springs had big teams — coal was still a big industry at the time. LaFollette was a big school drawing kids from a city of about 5,000 people. Jacksboro was a smaller city, but the school drew from throughout Campbell County.

The Dragons were chock full of seniors entering 1956, and big things were expected.

And big things happened, but not on the field.

“The thing is, the town had reached a consensus: This was the law and we were going to abide by the law,” Jerry Shattuck, a senior captain on the 1956 Clinton High School football team, said.

“Jim Crow was never benign, but in Clinton, Tennessee, it was about as benign as it could get.”

Shattuck said for 90-percent of Clintonians, desegregation was “no big deal.”

Shattuck said almost every kid in Clinton played pick basketball and football games — black or white — so integrating the school didn’t seem to bother the students.

John Kasper blew into town, and the first time he tried to stir up trouble Shattuck said about five people showed up. There were more media outlets in town than protesters.

“We would be in class — and we didn’t have air conditioning then — and the windows were open and you could these people out there … And it ticked us off,” he said. “We resented the hell out of it. They were messing with our senior year.”

An example of the resentment came before the first game of the season — the home opener against Lake City.

“We’d heard that some group was going to hold a rally at halftime of the game and that really made us mad,” Shattuck. “So we all (the team) agreed if that happened, there was going to be a scrimmage at the half.”

The 1956 team finished 9-2 with losses to Ketron and to “Knoxville Youth” in the South Clinton Optimist Bowl.

“We had a good team,” Shattuck said. “We had played Oak Ridge in the past and they always beat the heck out of us, but after that year they said, ‘Hey, they have a good team. Let’s schedule them.’

“The problem was all the seniors graduated from that team and Oak Ridge beat us handily (48-6) the next year (1957),” Shattuck said.

Shattuck recalled a player, Glenn ”Spooky” Jones, who played on the teams in the mid-1950s.

“He didn’t play much his junior year, but his senior year he really stood out,” Shattuck said. “I hated playing against him. He was so fast and would hit so hard … it wasn’t enjoyable.”

Jones got his nickname because he was born Oct. 31 — Halloween. “When he was a kid he was given that nickname and it just stuck,” Shattuck said.

Jones graduated at age 17, and was recruited by Bear Bryant, who sent him to Baylor for a year — to grow up.

“And he ran wild at Baylor,” Shattuck said. “And the next spring he was running first string for Bear Bryant at Alabama when he blew out his knee.”

But it was the 1960s during which the Clinton Dragons were to become dominant.

Nominate a former CHS player for the All-Century Team via e-mail to team100@mycouriernews.com.