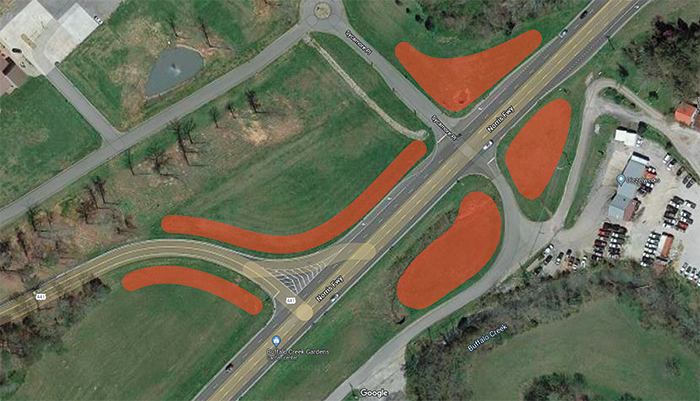 This overhead view shows the areas where trees are expected to be planted under a grant from the state of Tennessee to enhance the beuty of the U.S. 441 Scenic Byway. Covenant Life Church is in the upper left corner.
Free trees or not? That was the question, and the answer did not come easily.

Norris City Council members spent about half an hour Monday night debating whether the city should accept an offer from Anderson County to spend a $9,500 grant to plant trees on state highway right-of-way on Tennessee Highway 61 in the area of its two intersections with Norris Freeway/U.S. 441.

The money will come from the state through a program intended to enhance the U.S. 441 Scenic Byway, which was designated part of the U.S. Scenic Byways program last year.

Stephanie Wells, Anderson County’s tourism director, brought the proposal to the council, and said the city needed to approve the project before the Sept. 30 deadline that the county was facing to either accept or decline the grant money from the Tennessee Department of Transportation.

The council eventually voted to accept the “gift” from TDOT, but with some restrictions.

But the vote was not unanimous. Councilman Will Grinder voted against the resolution because it included planting trees on a piece of state property directly in front of Covenant Life Church, which sits on top of a hill overlooking the highway.

Grinder wanted to leave the property in front of the church out of the beautification project, after some suggestions were made that church officials might be upset that the trees could block the view of the church from the highway.

The council overrode his objection and passed the resolution 4-1 to accept the tree project, but did instruct some city officials to contact two adjacent property owners, including the church, to inform them of the plan.

Grinder noted that Covenant Life Church had been mowing and maintaining the grassy area that belongs to the state, and he suggested the church might not want to continue mowing if the trees were planted.

Also left out of the city’s resolution were two plots of land on the south side of the highway in front of a business. The proposal from Wells would have planted trees on that state property, as well.

“This is part of TDOT’s ‘Love Tennessee Byways’ program,” Wells told The Courier News. “Our main goal is to fulfill the plan set out for the Norris Freeway Scenic Byway, including maintaining and improving the aesthetics of the byway.

“We already have a mechanism in place for the funding, and we will start planting the trees as soon as possible.”

The U.S. Department of Transportation bestowed the honor on the section of U.S. 441 from Halls Crossroads in Knox County to Rocky Top in February 2021, said Michael Carberry, a member of the Norris Planning Commission who was largely responsible for getting the special designation for the highway.

Carberry prepared the extensive application and dozens of photos of scenes along and close to U.S. 441 to submit to the Federal Highway Administration – part of the Department of Transportation – in 2020.

“A National Scenic Byway is a road recognized by the United States Department of Transportation for one or more of six ‘intrinsic qualities’: archeological, cultural, historic, natural, recreational, and scenic,” according to Wikipedia.

“The program was established by Congress in 1991 to preserve and protect the nation’s scenic but often less-traveled roads and promote tourism and economic development. The National Scenic Byways Program is administered by the Federal Highway Administration