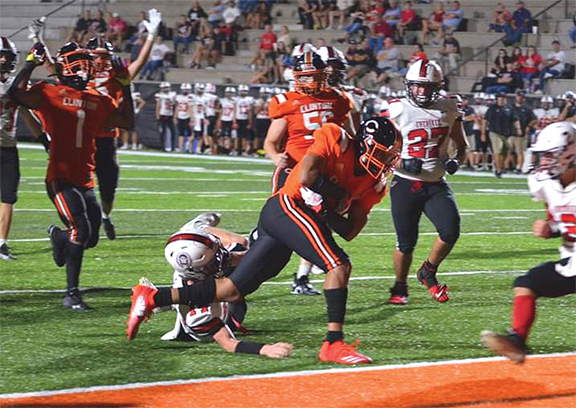 Clinton’s Jawan Goins powers past a Cherokee defender on his way to a score Friday night. The Dragons unleashed a 54-point scoring attack to go 3-1 for the season. (photo:Shari Wandell-Bryant )
Jawan Goins carried the ball six times for 150 yards and two touchdowns for Clinton (3-1).

Keith, one week after completing passes to nine different receivers at Oak Ridge, connected with eight Dragons against Cherokee (0-4). Lucas Kendall led the Clinton pass-catchers with four for 100 yards and a TD. Braylon Taylor added three catches for 44 yards and a score.

Jeremiah Lee returned a punt for a touchdown and added a receiving score for the Dragons.

Clinton Coach Darell Keith was unhappy with his team’s effort, which included 12 penalties for 157 yards and three scores that were called back because of penalties.

“I thought we played down to our competition,” he said. “I’m very dissatisfied. I had planned on playing a lot of young guys, but we couldn’t do that because we couldn’t stay focused. But that’s my fault. The unfocusing and undisciplined is my fault; it’ll fall back on me.

Clinton took the opening kickoff and marched 78 yards in six plays for a touchdown. Taylor caught a 14-yard pass, and Chauncey Felts ran twice for 29 yards before leaving the game with an injury. Kendall reeled in a 39-yard Keith pass to the Cherokee 16-yard line, and Wesley Phillips caught a TD pass on the next play. Jacob Prewitt’s extra point, the first of six he made in the game, gave Clinton a 7-0 lead with 10 minutes left in the first quarter.

The Dragons quickly forced a Cherokee punt, and Lee returned the kick 62 yards for a touchdown and a 13-0 lead.

The Chiefs managed a first down on their next drive, but Clinton’s D’mon Marable broke up a pass on third down and Elijah Batiste added a 4-yard quarterback sack to set up another punt.

Clinton moved 51 yards in only three plays to take a 20-0 lead with 4:13 left in the opening period. Kendall got a step ahead of his defender and hauled in a 41-yard Keith toss for a TD.

Cherokee would answer on its next drive, helped by two Dragon personal-foul penalties—one on fourth down—that gave the Chiefs first downs. Brandon Hollifield made the first of his two sacks in the game, but the Chiefs tallied on a 1-yard Joe Henley run for a TD. The extra-point kick failed, but Cherokee had cut the Dragon lead to 20-6 with 11:18 left in the second quarter.

Goins made a 52-yard run on the next Dragon series but lost a fumble on the play. On the ensuing Cherokee drive, Lee returned another punt for a 38-yard TD, but the score was nullified because of an illegal block.

Clinton dropped a TD in the end zone on its next drive and ended up turning the ball over on downs. Hollifield then made his second sack, and Cherokee—trying to avoid Lee—punted the ball only 12 yards. The Dragons scored in only three plays, going 42 yards. Keith ran once for 26 yards, and Goins, dragging a defender with him, rumbled in from 15 yards out for the TD and a 26-6 lead.

Cherokee answered again with a 72-yard drive in seven plays, helped by a Dragon pass-interference penalty that gave the Chiefs a first down. Hunter Larmer scored for Cherokee on a 31-yard pass from quarterback Landon Jeffers. Gage Wergin blocked the extra point for Clinton.

Goins returned the next kickoff 90 yards for a touchdown, but a crackback block on Clinton nullified the score. The half soon ended with the Dragons up 26-12.

Clinton put the game away with a 21-point third quarter. On the Dragons’ first drive, Keith ran 13 yards and Goins motored 46 for a touchdown. Prewitt’s kick made it 33-12 with only 2:11 gone in the quarter.

Lestat Williams body-slammed a Cherokee runner on a tackle to set up a three-and-out for the Dragon defense, and Clinton scored again in only two plays. Goins ran for 30 yards, and Lee made a sliding catch in the end zone on a 12-yard play for the TD and a 40-12 lead.

Derek Bean intercepted Jeffers on the next Chiefs drive. Clinton scored despite two personal-foul penalties, one of which nullified a Teegan Bolinger touchdown, on its next drive. Marable caught a 25-yard pass on the series, and Kendall added a 15-yard reception. Taylor caught the TD on an 11-yard pass from Keith. The 47-12 lead started mercy-rule timing in the game.

Pushing and shoving between the two teams on the next Cherokee drive led to an ejection of a player on each squad. The series ended with Marable recovering a fumble for the Dragons.

Taylor caught a 19-yard pass, Keith made a 23-yard run, Bolinger caught a 21-yard pass, and Marable snagged a 20-yard pass for the Dragons’ final score.

Clinton hosts region rival Powell in its next game Friday.