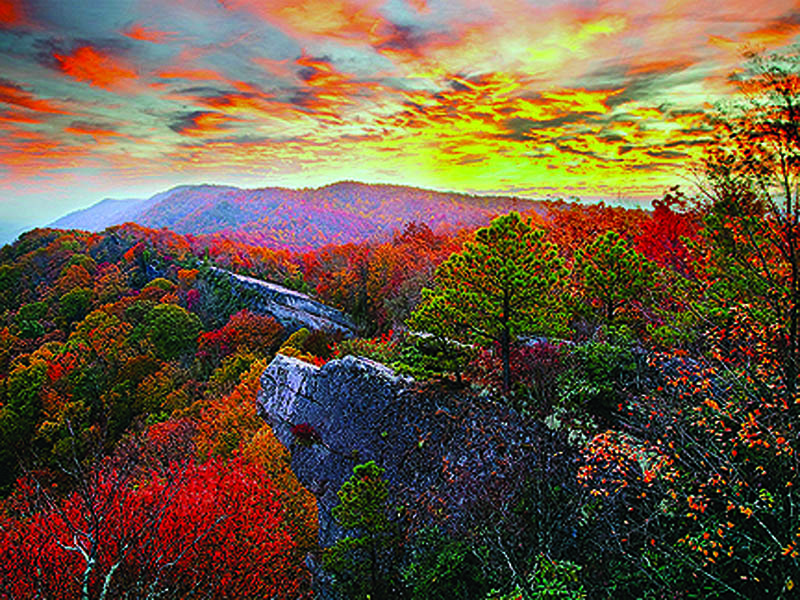 The following morning Jenny was again tied to a tree as the Indians prepared to go on a hunt.

It began raining after the hunting party left and the rain came as a blessing for Jenny. The rain caused her ties to begin loosening. She began moving her hands and arms and it caused them to loosen even more.

“Thank you good Lord in Heaven,” she said quietly. “This may be the time I’ve prayed for.”

Soon she was free from her bindings and escaped into the woods. She came to a small stream and immediately immersed herself and began swimming downstream. She swam as far as she could so the Indians would have a difficult time finding her trail. Jenny went ashore to rest but soon she was back in the water continuing her exodus. Later that night she hid in a hollow log near the stream.

Jenny Wiley was awakened during the night by the chattering of Indians as they passed near where she lay hidden. She thought about her little dog and assumed it followed the Indians in their search for her. Evidently it sped off after the Indians because soon all was quiet.

Jenny continued her flight to freedom as soon as she thought it was safe. She headed southward until she came to a fork in the trail. Jenny was momentarily undecided over which fork to take before noticing woodchips from an axe to the left and she chose to take that route.

A few hours later she emerged at the mouth of Little Paint Creek and saw the Harman blockhouse that was built in the preceding months by Mathias Harmon and others from her small settlement. Jenny was surprised and relieved. Surprised because she didn’t know the settlement had been built. Relieved because she thought many times in the preceding six months that she would never live to return home among people she knew. She now began to feel it was possible indeed and it gave her renewed strength. It was the happiest she had been in a long time.

The following day Henry Skaggs saw Jenny trudging along on the opposite bank of the river. His first thought was that she was an Indian squaw. Finally he recognized her and rushed to the river where he assisted her across on a crude raft and up the hill to a shelter. Later in life Jenny likened her steps up the riverbank that day to walking on golden stairs to Heaven. She couldn’t help but sob. She never thought she would live to return to her people.

Coincidentally as Jenny and Henry Skaggs climbed the bank toward the blockhouse the Indians appeared on the opposite side of the river with her small dog.

It was written many years ago that she was overwrought to the extent that for a while she was like a young child.

“How’s my Tom,” she finally asked after the emergency had passed.

“Tom’s gonna be a lot better when he sees you,” Skaggs answered.

It brought a trace of a smile and it surprised Jenny. She hadn’t smiled since her new born child had died.

Mathias Harmon hunted with others in the area of the Big Sandy River for nearly 25 years and planned to build Harman’s Station. After giving up the search for Jenny they proceeded to erect the blockhouse since they had a large contingent of men available.

Mathias led the party, including Jenny back to Walker’s Creek, in Tazewell County, VA, where she was reunited with her husband. During the journey they were attacked by Indians and Jenny helped repel the attackers by firing at them with a rifle.

Jenny and Tom had a happy reunion! All that they had gone through… can you imagine the reunion that they had? It was filled with happiness and sadness. They had lost all of their children but they had each other again. It was so unlikely that would have ever happen.

Tom had built another cabin with the assistance of several other settlers as was customary in that era. He was working on furnishings for it when Jenny arrived with the others.

Following Jenny’s escape the Indians became peskier to settlers in the region. The old Cherokee received a measure of revenge by leading a party of warriors who attacked and burned Harman Station. The fort had been a life saver for Jenny. Without it she may not have escaped from her captors.

The raiding bands of Indians remained troublesome, though less so, into the early 1800’s. James Skaggs, the brother of Henry, faced the old Cherokee chief who claimed Jenny Wiley as a squaw. The confrontation occurred near Big Blaine Creek. Though advanced in years the large Indian was an imposing specimen and was well versed as a fighter and woodsman.

Following the battle with Skaggs the old chief was mortally wounded and dying. He proceeded to chant a song of scorn toward the white settlers.

“Great Spirit, drive the white man from this land of our fathers,” he cried. “Return these mountains to the bear, deer, buffalo and to my brothers who have hunted here many seasons.”

Tom and Jenny Wiley started a new family with the arrival of Hezekiah, then Jane, Sally, Adam and William. A few years later after Kentucky received statehood, they were among a group of settlers who moved to the Big Sandy Valley region, near where Jenny was held captive.

Although Tom died in about 1810, Jenny lived to see all of her children grown. Her story became widely known and she became a heroic symbol among settlers just as Mary Ingles had years before. Jenny and Tom Wiley have many descendents who still reside in the mountains.

Jenny Wiley State Park was founded in the early 1950s near Prestonsburg, in Floyd County, Kentucky and named in her honor. Dewey Lake was completed in 1954 and is the centerpiece of the park. copyright 2022 Jadon Gibson

Jadon Gibson is a freelance writer from Harrogate. His writings are both historic and nostalgic in nature. Thanks to Lincoln Memorial University, Alice Lloyd College and the Museum of Appalachia for their assistance.