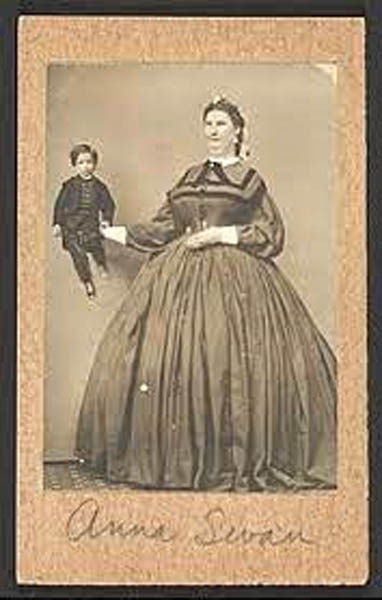 ANNA SWAN
Martin Van Buren Bates, the son of John W. and Sarah Bates, was born Nov. 9, 1837, in the mountains of eastern Kentucky.

His parents, five sisters and five brothers were all of normal size.

Martin began growing at an unordinary pace at age 7 and 8.

His father marked his height on the wall each month with a pencil. Martin said one month he grew nearly an inch.

“He’s just a baby,” his father would grin and say when people talked about his size. He soon had the nickname “Baby Bates.”

He continued to grow, and at age 15 he was nearly seven feet in height and weighed 250 pounds. Area folks still referred to him as Baby Bates.

After his school days in Letcher County, he continued his studies at Emory College in Washington County in Southwest Virginia where he graduated.

He began teaching, and was praised by his students and parents alike.

The Bates family were land owners and had slaves at times.

When the Civil War broke out, Martin enlisted as a private in the Fifth Kentucky Infantry on Sept. 15, 1861, at the age of 16. He was promoted to first lieutenant under Colonel Floyd. He later served in the Seventh Confederate Cavalry and was promoted to the rank of captain because of his distinguished service.

His height measured seven-and-one-half feet at the time. The title Captain Bates replaced Baby Bates as his sobriquet and it stayed with the giant throughout his lifetime.

Captain Bates fought gallantly in the war. On one instance, his unit was routed early one morning. After the men retreated a safe distance, they found Bates attempting to put on pants that were much too small for him. In his haste he had picked up one of the other men’s pants.

Surely the other soldier with Bates’ pants was equally startled when he tried to put them on.

On another occasion, Captain Bates suffered serious wounds and was captured during a battle near historic Cumberland Gap. The Yankees said he fought like 50 men.

The Yankees took delight in having the giant as a prisoner, and transported him by a series of mules with “his feet a-draggin’ and a rope around his neck.” After one of the animals gave out and laid down under his massive weight, they placed Martin on another one.

This was terrible misconduct. They lost the use of the mules and it was a gross abuse of the animals.

Back in Letcher County, Kentucky, after the war, Bates didn’t want to be part of the blue and gray sniping deaths and injuries that continued. Many others didn’t either and left – mostly to the West and Southwest.

There were so many who left that files in the courthouse were often stamped GTT for “gone to Texas.”

Captain Bates had a great chance of success in the outside world. Carnivals, circuses and traveling shows wanted him because he was unique.

He joined an exhibition traveling throughout the United States and Canada. In 1870, Judge H. G. Ingalls, a well-known promoter, asked him to come to Elizabeth, New Jersey, and join a company he was organizing for a European tour.

Bates accepted this offer in time to join the entourage. Ingalls billed him as “the Kentucky River Giant,” and the giant’s strong features, good manners and immense size resulted in his acceptance wherever he appeared.

Meanwhile, Anna Swan, who would become a female giant, was growing up and up and up in Nova Scotia off the coast of New Brunswick. Anna was the third of 13 children born to her parents, who were Scottish immigrants. Anna surpassed her mother in height by age 6 and became a seven-footer at age 15. Like Martin Van Buren Bates, she drew a lot of attention wherever she went.

“I heard about Anna Swan through a Quaker who came to my office one day,” Phineas T. Barnum, famous U.S. showman of Barnum & Bailey fame, wrote in his autobiography, which was published in 1869.

“He said she was the tallest girl in the world, a wonderful 17-year old girl, and he lived near her. I told him to obtain her exact height. He did and sent it to me. I sent an agent at once and he came back with Anna Swan.”

P.T. Barnum had a popular museum in which he exhibited wild animals and unusual characters of the time. After two disastrous fires, he decided to take the show to the people as the Barnum & Bailey Circus.

“Anna Swan was an intelligent girl and by no means ill-looking,” Barnum wrote. “During the long period she was in my employ, she was visited by thousands of people.

“After the burning of my second museum, she went to England where she attracted great attention.”

Martin Van Buren Bates met Anna Haining Swan through Judge Ingalls, and it was almost like love at first sight. The seven-foot, 11-inch Scottish lass from Nova Scotia and Martin Bates had a lot in common, so a courtship began.

The two eight-foot sweethearts became an instant hit with the British public, and on June 2, 1871, Queen Victoria commanded their appearance at Buckingham Palace.

A wedding is in the works for you to read about next week. Martin the giant takes the tallest girl in the world Anna the giant as his bride.

Don’t forget you can buy past issues at the newspaper office. If you like my stories please tell others as they may like them too. Thank you.

Jadon Gibson is a widely read Appalachian writer from Harrogate. His writings are both historic and nostalgic in nature. Thanks to Lincoln Memorial University, Alice Lloyd College and the Museum of Appalachia for their assistance.