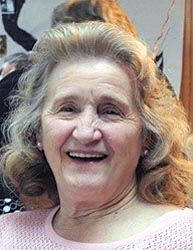 Glenna Wilson Pack, 83, Clinton, passed away Saturday, Sept. 17, 2022, peacefully at her home surrounded by her family. She was born on July 30, 1939, in the Dutch Valley community where she lived her whole life. She was a loving and devoted wife to J.L. Pack for 46 years, and a wonderful mother, grandmother and great-grandmother, who loved her family immensely. She was a co-owner of Nola & Glenna’s Upholstery in the Marlow community for more than 20 years. Glenna sang for the Lord her whole life as part of the Wilson Sisters group and was a longtime and faithful member of Dutch Valley Missionary Baptist Church which she loved dearly. She was always trying to help her family and others, whether it be by providing a meal, a helping hand, or prayers for anyone in need. Her family will miss her greatly, but is joyful in knowing she’s now with her Savior. She was preceded in death by: Husband, J.L. Pack; parents, Oscar Wilson and Martha Delberta Long Wilson; sisters, Betty Ruth Wilson, Patricia Ann Wilson, Jewel Gouge, Mary Lee, and Nola Howard; brothers, the Rev. Bill Wilson and Robert “Bob” Wilson; brothers-in-law, Robert Lee, Carlos Johnson, Phillip Taylor, Tom Stubbs, Jerry Haynes and Berl Howard; sister-in-law, Maggie Lackey Wilson. Survivors include: Sons, Jonathan Pack and wife Misty of Clinton, Jeffrey Pack and wife Alicia of Clinton; sisters, Bonnie Stubbs, Molly Kennedy and husband Billy, Dixie Haynes, Rosa Manning and husband Charles, and Gertie Johnson; grandchildren, Kaylee Bradshaw and husband Robby, Lindsey Pack, Heather Lane and husband Chase, Logan Pack and wife Hannah, and Emma Pack; great-grandchildren, Aedyn Pack, Isaiah Lane and J.L. Lane. All services will be held Saturday, Sept. 24, 2022, with the Rev. Charles Northrup officiating. The family will be receiving friends from 11 a.m. – 2 p.m. at Dutch Valley Missionary Baptist Church immediately followed by the funeral at 2 p.m. and then the graveside service being held at Long Cemetery. Premier Sharp Funeral Home of Oliver Springs is in charge of arrangements. 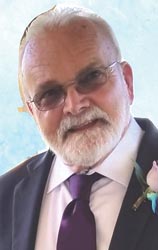 James “Jim” Phillip Cameron, 75, a successful long time business owner and resident of Anderson County, laid down his working tools in the early morning hours of Thursday, Sept. 15, 2022, with his wife of 31 years by his side at Parkwest Medical Center. Knoxville. Jim was a doting husband, father, and Pawpa. He was of the Baptist faith and loved God and his family infinitely. He leaves to cherish his memory: His wife, Sandy; daughter, Jacki Lawson and husband Scott; grandsons, Lance Montgomery and wife Kayla, Sean Monterrey, and Trey Montgomery; great-grandson, Daniel Montgomery; sister, Norma Richards; brother, Danny Cameron and wife Gail; nieces, Denise Tindall, Jessica Woodsmall; nephew, Ricky Richards; special cousins, Buddy Allen, Noah Allen, and Matthew Allen; and a host of extended family and friends. Jim leaves a long list of accomplishments but was most proud of his membership in the Scottish Rite of Freemasonry of Valley of Knoxville where he achieved the rank of 32nd Degree in 1997. Additionally he was honored to be a Shiner of the Kerbela Temple of Knoxville. Jim was preceded in death by: Nother, Marie Smith and husband Ed; father, Jay Cameron; grandfather, Dan Allen; grandmother, Iona Allen; brother, Jamie Cameron; uncle, Bud Allen; and son-in-law, Kenneth Montgomery. He will be missed by all who knew him. In lieu of flowers, the family requests donations are made to the Shriner’s Children Hospital in Lexington, Ky. There will be a private celebration of life on a date to be determined by his family. The staff off Woodhaven Funeral Home & Memorial Gardens is honored to serve the James Phillip Cameron family.

Linda George Duncan, Clinton, passed away Monday Sept. 12, 2022. She was longtime member of Second Baptist Church in Clinton. Linda was preceded in death by her parents, Johnny and Billie George. She is survived by: Husband of 54 years, Lynn Duncan; son and daughter-in-law, Gregg and Leslie Duncan; and granddaughters, Eliza and Hannah. A memorial service will be announced at a later date. www.holleygamble.com 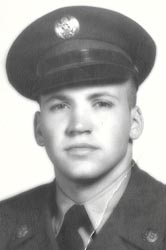 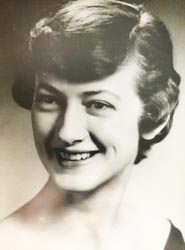 Sidney Jeanette Wiley McMaster, aka GG, or Jeanette, was born Friday, Jan. 22, 1932, in Tupelo, Miss., the eldest child of Eugene “Gene” Fulton and Mildred “Mid” Newell Wiley. She died Thursday, Sept. 8, 2022, in Oak Ridge. Predeceasing her were her mother and father; brother, David Lee Wiley; and husband, William Murray McMaster. Left to remember her are: Sisters, Ann Can Hassel of Heiskell, and Mary (Bill) McWhorter of Oak Ridge; children, Bruce (Karla) McMaster of Oak Ridge, Jane McMaster (Dan Clemons) of Petaluma, Calif., and Catherine (Paul) Pietrow of Rhineback, N.Y.; grandchildren, Lindsay (Corwin Walls) and Kasey (Ren Li) McMaster, Anne and Rachel Pietrow, and Ben Clemens. GG was beautiful and carried herself with class (was it just a coincidence she and Queen Elizabeth II passed away the same day?). She graduated from Maryville College and attained her master’s in library science from Florida State University. An avid reader and lover of books, she spent her career as a librarian. She leaves behind many memories; both those she recounted and those she made with her family. There were the regular visits to Pontotoc, Miss., to visit her grandparents when she was a young girl. There was the train ride during which she and her sister, Ann, traveled together to Knoxville from Pontotoc (at the tender ages of 12 and 6) to join their parents when they first moved to East Tennessee. She reminisced about lying in bed at her Aunt Gracie’s house in Nashville, with no air conditioning, sweltering, during the regular summer stints at the Vanderbilt Divinity School Library under her aunt’s tutelage. Then there was her daring trip to Mexico City with Gracie, in the 1950s (via bus!). GG often spent time in the Smokies, and some of her other adventures include the time she made the difficult climb up the front of the Chimney Tops at the ripe age of 50, with Jane and Catherine. Another memorial hiking trip, with her family, was to Spence Field where she supported the fending off of a hungry bear that interrupted the family as they picked blueberries and sunbathed, and had to be chased away by a shoe to its nose. GG was also an accomplished pianist and a dedicated gardener. A naturally commanding presence, GG did not hesitate to “boss around” her next younger sister, Ann, who was able to return the favor in the past 18 months as Ann cared for GG at home. We recall Ann and GG watching football (or basketball) games with a glass of white wine in one hand and Cheetos in the other. GG loved to cook (just kidding), but despite that, she made delicious fried chicken and always the best of the best carrot cake for family occasions. IF you wish to memorialize Jeanette, consider a donation to Dolly Parton’s Imagination Library. She will be missed. To leave your condolences please visit www.woodhavenfh.com The staff of Woodhaven Funeral Home & Memorial Gardens is honored to serve the Sidney Jeanette Wiley McMaster family.

Gary Dennis West, 62, Caryville, passed away Sept. 7, 2022, at his residence. Gary was born June 26, 1960, in New York to Virdeth west and Ruby Wilson. Gary lived in Cleveland, Ohio, and had lived in Tennessee for 45 years. He was of the Baptist faith and went to Temple Baptist Church in Knoxville. He was preceded in death by: Parents Virdeth West and Ruby West; wife, Edith Byrge West; and brother, Jerry West. He is survived by: Sons, Ryan West, Gary Shane West; special friends, Carl Daugherty, Ron Evans; sister, Lisa West; niece, Amanda Adcock; grandchildren, Landon West, Briann Asberry, Madison West, Riley West; a host of other relatives and friends. Visitation was held from 4 – 5 p.m. Tuesday, Sept. 13, 2022, in the Hatmaker Funeral Home Chapel. Funeral service was held at 5 p.m. Tuesday, Sept. 13, 2022, in the Hatmaker Funeral Home Chapel with the Rev. Jimmy Lindsay officiating. Interment followed the funeral service at Sam Foust Cemetery in Lake City with Military honors presented by the Campbell County Honor Guard. You may also view Gary's obituary and guestbook online at www.hatmakerfuneralhome.com Hatmaker Funeral Home, Lake City, was in charge of arrangements. 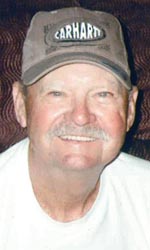 Billy Wade Brock, 88, Clinton, passed away at his home surrounded by his family Sept. 3, 2022. He was an active member of St. Mark United Methodist Church and served on many committees. Wade was a veteran of the United States Army having served in the Korean conflict. He was a mason and member of Lodge # 376 A&M Masonic Lodge and former Past Master, also the Eastern Star and Odd Fellows. Wade was past board member of Clinton Senior Center and honored by Mayor and Anderson County Commission in 2018 for his service to Anderson County. He was also a member of Anderson County Fair Association. Wade retired from Clinton Utilities Broad with 40-plus years of service. He never met a stranger and was comfortable with all he met, whether rich or poor. Wade enjoyed city and county commission meetings whether attending or watching them on local television channel. He enjoyed helping others and was an Anderson County Constable for 16 years. He was preceded in death by: Parents, Robert and Thelma Brock; sister, Caroline Brock Viles and husband Ray; brother, James Samuel Brock; infant son, Lindsey Brock; brothers-in-law, Kenneth Lindsey and Hoyet Hill; sister-in-law, Kay Lindsey. To cherish his memory, he leaves: Wife of 66 years, Lynda Brock; son, Cris Brock; daughter, Lisa Brock Hancock; granddaughter, Kennedy, who he adored; sister, Wanda Hill; brother-in-law, Maurice Lindsey; sister-in-law, Brenda Lindsey; many nieces, nephews, special cousins and friends. The family will receive friends from 5 – 7 p.m. Wednesday, Sept. 7, 2022, at Holley-Gamble Funeral Home with the funeral service to follow with the Rev. Sam Reese, the Rev. Wayne Headrick, and Chaplain Greg Bennett officiating. Family and friends will meet at Holley-Gamble Funeral Home at 10:30 a.m. Thursday, Sept. 8, 2022, and go in funeral procession to Woodhaven Memorial Garden for an 11 a.m. interment. The family expresses thanks to University of Tennessee Hospice healthcare providers, especially Stephanie Elliott and Melissa and Dr. Wendy May for her excellent care over the years. Memorials may be made to St. Mark United Methodist Church, 248 Main Street Clinton, TN 37716. www.holleygamble.com

The Man, The Myth, The Legend — Timothy Lee Fagan was born April 4, 1965, in Frankfort, Ind., raised in Clinton, went to be with the lord Sept. 1, 2022. Tim was married to the love of his life for 38 years, Peggy Fagan. He was a die-Hard Tennessee Volunteer fan. Graduated from Clinton High School in 1983, Tim was a Baptist, and a proud member of the CHS Band. Tim was a jack of all trades and loved building anything he could picture. He loved going to watch the races and his Tennessee Football, but Tim’s beyond favorite time was always spending time with family and friends. Preceded in death by: Brother/cousin, David Scott Hanson; grandmother, Letha Pearl Owens; son-In-law, Justin Lynn Braden; parent, Gaines Harold Fagan; parent, Bob Wayne Tompkins; uncle and aunt, J.T. and June Pyles. Survived by: Wife of 38 years, Peggy Sue Fagan; children, Joshua Lee Fagan, Kimberly LeeAnne and David Stringfield, Heather AshLee Fagan and Hunter Robbins; grandchildren, Izzy, Gabi, Nat-Bug, Sissy, Deano, Aaliyah, McKinzlee; mother, Nancy Tompkins; special brother/family, Gary and Brenda Thornton, Kyle and Sonya Thornton; sister, Tamara Queen; favorite in-laws, Flossie and Jack Ferguson; brothers-in-law, Wayne and Lisa Ferguson, John and Aimee Ferguson; a host of nieces, nephews, family, and friends. Visitation was held from 5 – 7 p.m. Sunday, Sept. 4, 2022, at Hatmaker Funeral Home. Funeral service was at 11 a.m. Monday, Sept. 5, 2022, in the Hatmaker Funeral Home Chapel. A graveside service was held following the funeral service Monday, Sept. 5, 2022, at New Vasper Cemetery in Caryville.